*** "WIFFLE" is a registered trademark of The Wiffle Ball Inc. We only use OFFICIAL WIFFLE Bats and balls. ***


IN IT TO WIN IT RETURNS TO CAMPIONSHIP FORM, WINS 34th ANNUAL EVENT

Uncensored, after back to back runners up, rebrand themselves back to their original name, IN IT TO WIN IT, and defeated Catch A Wiff 5-0 to capture their 5th championship since 2014 at Kenly's KAPARC facility.
Veterans Craig Hardin, Jordan Adams and Caleb Byrd add newcomer Harrison Grady to the roster, and Grady responds with an MVP performance, including 2 home runs and 4 RBI in the championship game.
Two-time defending champs the Hit Men finished third, while the Four Oaks Fury end up in fourth place.
Hardin and Adams made history Saturday by becoming the 17th and 18th members of the North Carolina Wiffle Ball Hall of Fame.
This years tournament was the 34th annual state championship, and the 41st consecutive tourney overall, having started in 1982 as the Kenly Wiffle Ball Tournament. It is the second oldest Wiffle Ball Tournament in the world, bested only by The World Wiffle Ball Championship, which began in 1980 in Mishawaka, Indiana and is currently held in Midlothian, Illnois.

The North Carolina Wiffle Ball Tournament announced its Silver Anniversary team, consisting of the 10 most decorated players in the first 25 years of the event (1989-2013). 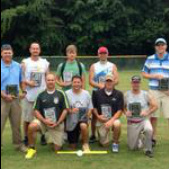 The North Carolina Wiffle Ball Tournament has its roots 39  years ago in tiny Kenly, NC. The neighborhood kids, tired of breaking windows and catching flak from their parents for it, took up Wiffle Ball instead.

In 1989, tournament co-founders Mike Grizzard and Jeff Davis, at Grizzard's urging, moved the tournament out of neighbor Ray Ballance's backyard and into the town's baseball field, naming it "The North Carolina State Wiffle Ball Tournament" . 16 teams showed up that year, and the rest is history. The event was held in Kenly until 2006, when it was moved to Smithfield. In 2020, it was played in Spivey's Corner at beautiful Miffly Field.

Last year marked the 32th Annual North Carolina Wiffle Ball Tournament, and 13 teams showed up for what is now the longest running State Tourney in the United States, and the second-oldest wiffle ball tournament in the world, bested only by the World Wiffleball Championship in Mishawaka, Indiana, which began in 1980. We have our own Hall of Fame, which began in 1999, and now has 15 members.

Our event is slow pitch, and is played almost exactly like real baseball or softball, using Official Wiffle bats and balls. Yes, we run the bases, and NO we DO NOT throw the ball at runners. This ain't kickball.

For more on the rules of our game and why we believe the way we play Wiffle Ball is best, check out our "Rules" and "Why Our Game is Best" sections of the site.

Thanks for visiting, and we hope to see you next July at the 26th Annual North Carolina Wiffle Ball Tournament! 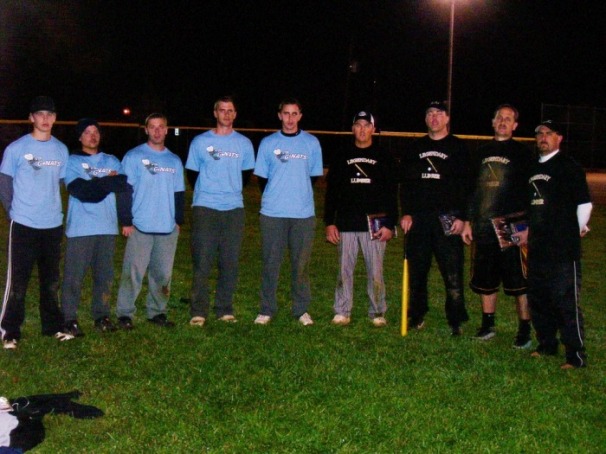 Both teams were unbeaten entering the title game, and the G-Nats led 5-3 entering the bottom of the sixth inning of the seven inning game. Legendary Lumber manufactured a run to cut the lead to 5-4, and then with Pittman on third and two outs, Baker homered to give Lumber the 6-5 lead, which they held onto by getting the G-Nats 1-2-3 in the seventh.

Baker was named the tournament MVP, as he homered over 20 times in seven games and pitched a fielded flawlessly throughout the day. His teammates Duane Pittman, Jeff Davis and Chris Davis each joined him on the All-Tournament team. The G-Nats' Austin and Luke Murray were named All-Tournament, while Josh Murray, Brian Powell and Brent Powell were Second Team All-Tournament.

Legendary Lumber outscored their opponents 100-25 in the event, defeating Swing This! of Illinois 14-4, the defending National Champions Georgia Storm 21-6, and last year's runners-up the Diamond Dawgs 19-4 in pool play. In the single-elimination portion, they blitzed the Georgia Storm 26-3 in a rematch, blasting 19 homers, then beat Indianapolis' Plastic in the Park 7-4. Their semi-final victim was Illinois' 630 All-Stars, whom they shut out 7-0.

Meanwhile, the G-Nats were shutting out Seymour's own Whatever It Takes 8-0 to set up the all-North Carolina title game.

Kudos to Lumber's Chris Davis, who tore his ACL in the final round robin games, yet played out the rest of the tournament despite the injury.

The NHWBF plays by much different rules than the North Carolina Wiffle Ball Tournament, but our teams seemed not to mind, as their defense and big bats countered all opponents as well as the cold weather and rain.

With their 1-2 finish, Legendary Lumber and the G-Nats also finished 1-2 in the NWHBF's final 2009 Rankings. Go to www.nwhbf.net for more info and photos of the event.

The Inaugral Class of the World of Wiffleball Hall of Fame was announced Monday (Sept. 28), and three North Carolina players were elected.  Current North Carolina Hall of Fame members Duane Pittman, Chris Davis, and Jeff Davis were among the 38 players, directors, and advocates elected to the first ever national Hall of Fame.

23 fast pitch and 15 slow pitch inductees were selected for the hall, which will induct the inaugral class along with the Hall's opening in Cincinnati, Ohio on July 2nd-4th, 2010. The Induction banquet will be held Friday night, with a Hall of Fame Firecracker Tournament for both slow and fast pitch teams to be held on Saturday, July 3rd.

The World Of Wiffleball Hall of Fame had 68 people nominated for its first class, and 38 were elected in four catagories: Directors, Current Players, Advocates, and Legends. Pittman was elected in the "Current Player" catagory, while the Davis brothers were elected as 'Legends", which requires that a player be retired, or have been retired for five years at one time in their careers.

In addition, Jeff Davis has been named to the nine-member World Of Wiffleball Hall of Fame Advisory Board, which will help get the Hall ready for its opening next year.

For more information and a complete list of Inductees, go to the Hall of Fame's website at  www.worldofwiffle.webs.com